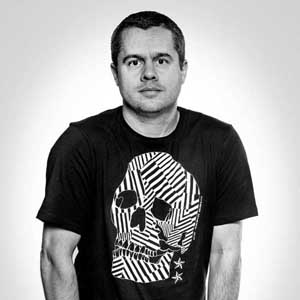 Richard began his adventure in digital media during the 1990’s with London agencies EHS-Real-time and AMX Studios, in the role of Senior Designer, working for a wide range of clients including Canon, The Spice Girls and The UK Football Association, before moving in 2000 to Italian fashion brand Diesel where he spent 12 years collaborating with some of the world most talented creatives, designers, musicians and agencies. During which time Richard worked on pioneering digital campaigns, launched one of the first fashion eCommerce sites, and directed the world’s first fully holographic fashion show.

Richard is now leading the Digital Communications team for the premium Italian footwear brand Geox, where he is overseeing the brand’s integrated digital strategy.

GEOX is known for its invention of the “shoe that breathes”, and has created a cult-like following in more than 100 countries with its blend of breathable technologies and stylish Italian design. Geox‘s mission is to diffuse technological innovation, enhancing people’s daily wellbeing through products with premium comfort, breathability and impermeability.

Since starting their collaboration with Norwegian creative agency SMFB in 2012, together they have won Gold at the Cannes Lions festival for their campaign “Amphibiox Urban Waterproof Shoes”. Their follow up 2013 waterproof shoe collection launch “7 Days of Rain” also recently picked up Grand Prix at Euro Best, while the “Geox – Scream Challenge” sponsorship activation viral surpassed 1,000,000 organic unpaid views within only a few weeks of its launch.

Richard will be bringing in SMFB’s Kristian Kristiansen to talk about their latest project and how digital marketing is helping Geox bring their products to a wider audience.